Heritage Hogs in a Respectable and Responsible Environment

It is fair season! The end of July and beginning of August brings on the age old tradition of the county fair. Carnival rides, funnel cakes, exhibit halls, pie ribbons, tractor pulls, and, of course, livestock. Of all my years of enjoying various county fairs, I had never taken in a Swine Show! I was feeling sorely left out of the fun, so this year, Dustin and I and our families, ventured to the Washington County Fair, in Akron, Colorado,  and watched the 4H Swine Show.

Sitting perched in the aluminum bleachers overlooking the show pen, we were all ready to experience the show. However, never having been to a swine show before, we had no idea what to expect. We hear the announcer calling the first group of kids – the older group first – to the staging area. We see the kids load their pigs up in the staging pens. Then, one by one, they are let into the show arena. Then the questions start – what the heck are they doing?!?! 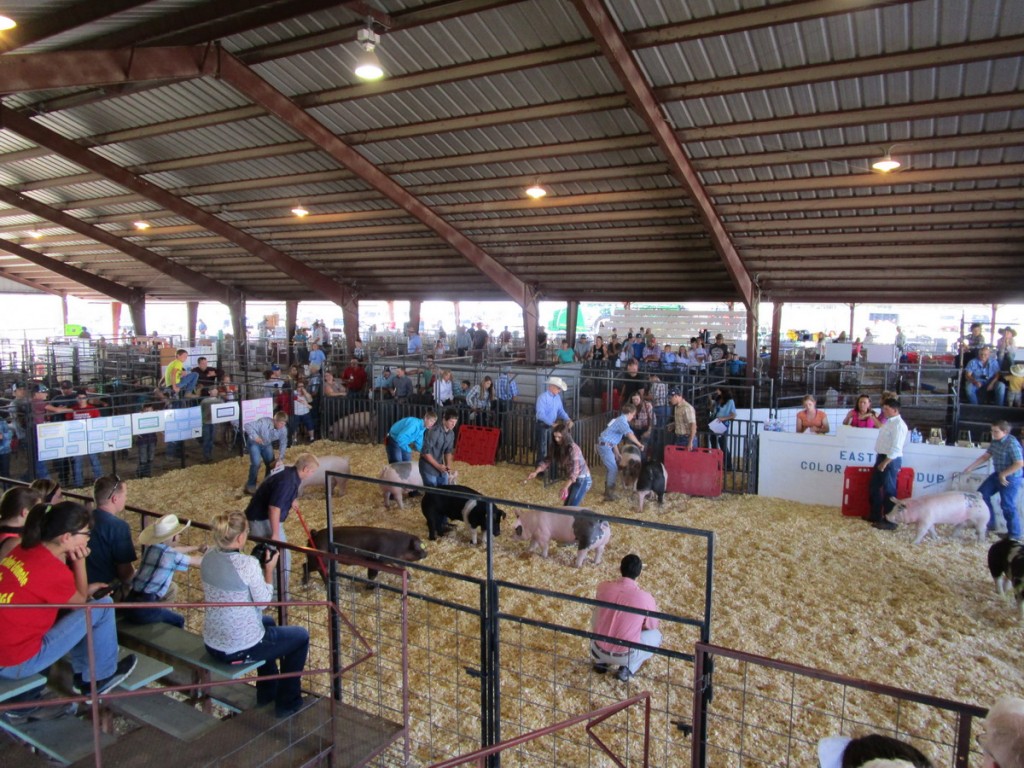 The judge walked quietly around the center of the ring, squatting, standing, looking, judging. The kids came out with their 200+ pound oinkers and walked carefully behind and to the side of them, controlling them with little sticks. The kids kept one eye on the judge, and one on their pig.

Luckily for us, there were some younger 4H kids sitting in front of us, waiting their turn to show. We bombarded them with a multitude of newbie questions. They were cute and tolerant of us, and willingly answered all our questions. Turns out this first round was simply the kids being judged as to how they handled their pigs. The judge didn’t care what the pig looked like, he was just analyzing the kids and their showmanship. The kids needed to keep their pigs under control, keep them walking at a constant speed, towards the center of the ring, and watch the judge for instructions.

This went on for a little while, until the judge slowly started ejecting the kids one by one. He kept a couple out, then declared the champion and reserve champion of that group. He then went on to explain what he saw, and why he judged the way he did.

As the afternoon went on, more groups of kids came out, each set younger than the previous. By far, the cutest event was the pee-wee group! They were adorable in their little farmer outfits, sticks and pigs way bigger than them, all trying their best to do what the big kids were doing. 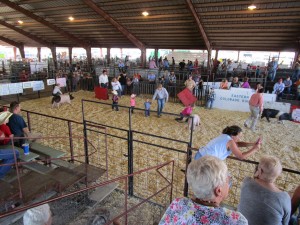 The later rounds were the actual swine judging. The judge was very verbose on why he selected each pig as the best. Very verbose. I never thought a pig could be explained in so many different ways. He reminded me of a good color commentator in any sports broadcast, finding new and exciting ways to tell you basically the same thing he had just said moments ago.

We stayed through countless rounds until all the champions and reserve champions were announced. We had a lot of fun watching all of the kids work so hard with their animals. We saw the months of work and preparation that went in to their one night of fame in the swine show ring. It was nice to see them care so much for their pigs, and treat them respectfully, even when the pigs were not being so agreeable.

We had a great time! I was a little sad the fair wasn’t officially open, so I missed out on a corn dog, but other than that… 10/10 would do it again!

Theme by Anders Noren — Up ↑